Most of us will have some awareness of what epilepsy is, but what you may not know is that anyone could have a single epileptic seizure at some point in their lives.

What is an epileptic seizure?

Epileptic seizures can be triggered by a variety of things for epileptic sufferers, including lack of sleep, stress, alcohol, and not taking medication.

There are six types of epileptic seizure, which fall into two main groups: focal and generalised seizure. While seizures are not usually a medical emergency (unless the person injures themselves during their seizure) one should be aware of ‘status epilepticus’.

A person’s seizures usually stop by themselves, and for someone who suffers from epilepsy, their seizures will normally last the same duration each time. However, sometimes seizures do not stop or one follows another without the person recovering in between. If this goes on for 30 minutes or more it is called ‘status’. This is uncommon, but can happen in any type of seizure.

During this seizure, the casualty is conscious, usually knows something is happening, and will remember it afterwards. Some people find these seizures hard to describe, and the feelings associated vary depending on where in the brain it takes place. For some people, these seizures may develop into another type of seizure, with the focal aware seizure serving as a ‘warning’.

These are the seizures most commonly associated with epilepsy, and have clearly visible effects. At the start of the seizure, the person’s body goes stiff, and if they are standing up they usually fall backwards. They will become unconscious, but may cry out first, and/or bite their own tongue or cheek.

During the seizure, the person will convulse as their muscles relax and tighten rhythmically. Their breathing may become difficult or noisy, and their skin may become very pale or bluish. Once the seizure stops, their breathing and colour should return to normal, but they may feel tired, confused, sleepy or have a headache.

These seizures tend to be brief and people usually recover quickly. However, for tonic clonic seizures, status is a medical emergency and you should call an ambulance. Don’t wait 30 minutes first. A general first aid guide for seizures will follow later.

This is also known as a ‘drop attack’, as the person’s muscles suddenly relax and they become floppy. This means that if they’re standing, they often fall, usually forwards. This may mean they injure their head or face. People usually recover quickly from this seizure, asides from any injuries they sustain from the fall.

These affect a larger part of one side of the brain than focal aware seizures. While the person remains conscious, their behaviour is affected. They may become confused, may not be able to hear people, or fully understand what is being said to them. They may react unusually to other people and could become aggressive if you speak loudly to them.

When starting in the temporal lobe, these seizures usually last two to three minutes and may include:

When starting in the frontal lobe, these seizures usually last 15-30 seconds and may include:

These are more common in children than adults and can be very frequent. During an absence seizure, the person becomes unconscious for a short time. They will not respond to what is happening around them, and they may stare or have a blank look. Sometimes the eyelids flutter. If they are walking, they may carry on doing so, but not be aware of what they are doing. This usually lasts only a few seconds and may not be noticed. Sometimes, it can last longer, and may cause the limbs to go limp and cause a fall.

This means ‘muscle jerk’. In a myoclonic seizure, the person is conscious, and their seizure is brief, but may happen in clusters. This often happens shortly after waking. Muscle jerks aren’t always caused by epilepsy.

Most seizures won’t require an ambulance or medical treatment in themselves, and bystanders should respond by comforting the individual and ensuring that they are safe. However, tonic clonic and atonic seizures involve sudden loss of consciousness and therefore may result in injury which require first aid or urgent medical attention, and you must always be aware that a tonic clonic seizure which lasts for more than 5 minutes warrants a 999 call.

If someone collapses and appears to be having an epileptic seizure, take the following steps:

Once the seizure has subsided you should: 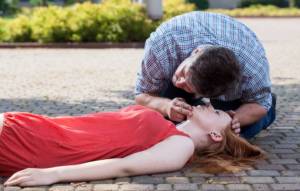 Call an ambulance if:

Responding to seizures is part of our Ofqual Accredited 3 day First Aid at Work course. Find out more here.