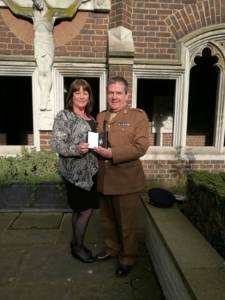 In recognition of his voluntary first aid work, earlier this year our senior trainer, Dennis Outram, was appointed by HM the Queen as a Serving Brother of the Order of St John! He was officially presented with his award on the 20th of March at the St John Priory Church in London by Surgeon Rear Admiral Lionel Jarvis, the Chair of St John Ambulance.

Dennis first got involved with first aid at the age of 15 whilst completing his Duke of Edinburgh Award. After finishing school, he served in the British Army for 11 years. He later joined Safety First Aid Training as an instructor in 2008 and has taught thousands of our attendees essential first aid skills since then. In addition to his work with us, he has worked with the Army Cadet Force for 28 years and has been a Community First Responder for the last ten.

It was for his work teaching first aid skills to army cadets that Dennis was recommended for admission to the Order of St John, which is a great honour, similar to receiving an MBE.

What is the Order of St John?

Constituted by a royal charter from Queen Victoria in 1888, the Order of St John is a chivalric order, headed by the Queen, which operates throughout the Commonwealth. Its mission is to prevent and relieve sickness and injury, and it is best known for its service organisation, St John Ambulance, which is the UK’s leading first aid charity and has sister organisations working in 35 other countries. Around the world, St John International has over 245,000 volunteers and over 21,000 members: including Dennis! You can find out more about the Order’s history here.

We would like to congratulate Dennis for his achievement and we wish him even greater success in the future!